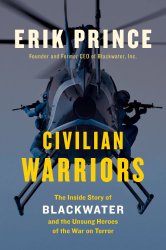 The book seemed to convey a human side to Prince as well as the staff that worked for him at Blackwater. Prince talks about his infidelity and loss of his first wife. It certainly doesn’t make you want to like him, but there is sense of honesty around that part of his life, honesty I felt to be more real than what you’d see from a politician like John Edwards. The people in the book seem distant. You don’t really get to know them. I’m talking about the teams that got killed doing missions for uncle sam. The tragic fall of four staff members in Fallujah is hard to imagine. The four were ambused, killed, set on fire, corpses dragged through the streets and then hung from a bridge. Say what you want about Prince or Blackwater, this was horrific.

Of course there is Prince’s side of the story. The side of Blackwater that was never really told in the media. To better understand the role of Blackwater in governmental affairs, Prince gives us a history of government’s use of contractors during major conflicts going back to the 1800’s. Blackwater, without question, grew exponentially with lucrative multimillion dollar contracts from the US government. There were other firms that made even more money than Blackwater but seldom made the lead stories in newspapers, magazines, and TV. As things heated up in hot zones like Fallujah the media started putting the spotlight on Blackwater, often portraying the staff as trigger-happy cowboys. What the media did not do was cover the stories of what these people did to overcome great odds to ensure the safety of some of their clients.

It is easy to take sides when all you hear is being propagated via many media channels and through a megaphone, but it’s also important to know there are always three sides to a story. Even at the end of the book Prince wants to disclose his affiliation with the CIA but is unable to do so outright due to nondisclosure agreements, etc. However, he gets a third party individual to put something together in order to elaborate on that confidential relationship.  I enjoyed  the book and as an ex-soldier, can appreciate the lines that are blurred and not clear cut when it comes to an unconventional enemy, a government that is about policy and politics, an organization stuck in the middle of it all, and the soldiers that are just trying to do their jobs and survive.

Want to read more about Blackwater, Erik Prince, and the men that lost their lives in foreign hell holes? Purchase this book.