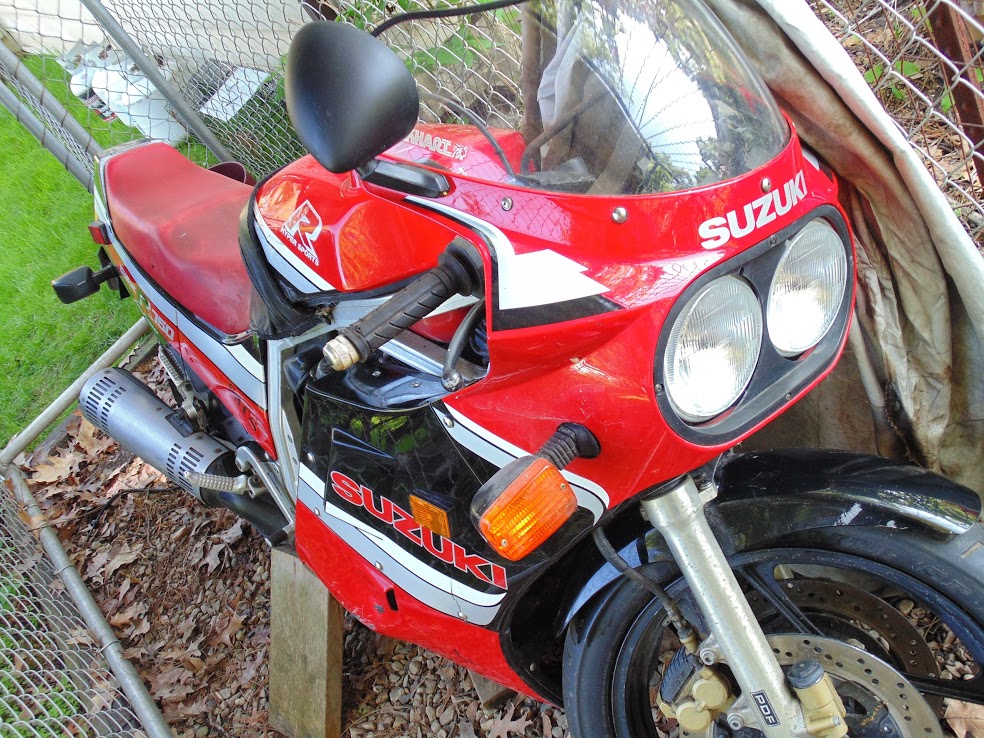 I was quite young, I don’t think I was even in my teens. My uncle had a 70’s model Honda 750 Four. He made a left hand turn onto a street in our small village and I thought I was going to fall off right on to the pavement. I had ridden a pedal bike every day as a kid. It was fun to go ‘ride around’ as I would often tell my mother when she asked where I was going.  It was a way to get to friends’s houses, baseball practice, or just cruise around.I knew a motorcycle would be the same to me as an adult as riding a bike was to me as a kid. My uncle’s ride, though not long at the time, still sticks with me today. During my teenage years I often purchased motorcycle magazines. Who had the fastest model? Kawasaki, Honda, Suzuki, Yami? My mother forbade me to buy a cycle until I was an adult. She had actually owned an ’82-ish Suzuki 450GS. She’d often tip it over because she could barely touch the ground at stop signs. She would tell me how a friend succumbed to a terrible cycle accident and was now brain dead; however, she knew it was just a matter of time.Once I graduated from high school, at the adult age of 18, I purchased my first motorcycle from one of my friends. It was an 86 Suzuki GSXR 750. I didn’t treat it as hard as my buddy, who often did wheelies and essentially beat the crap out of it. I do remember riding it in a sea of Harley in the Wisconsin Liberty ride. A ride that ensured a helmet law was not enacted, but that the rider was free to choose. Of course, I also had my occasional pick up of a young lady that just wanted a ride.

I left to go into the military, stationed in Germany in 1990. I purchased an 87 Kawasaki Ninja 1000R from an officer. I didn’t ship it home but sold that to a friend of mine. I still owned the GSXR back home. I tell everyone, “it’s like the Top Gun bike.”I didn’t ride for a while after getting back to the states. I’m not sure why. The Suzuki needed work. I neglected it for a 95 Kawasaki Vulcan. I introduced my wife to riding. She loved it, until I laid it down and she got injured. Nothing life threatening, but was certainly scary. That was back in 2004. I sold the dinged up Vulcan.My wife, like my mother, knew it was just a matter of time before I got another cycle. Now, 10 years later, I am back in the saddle with my 99 BMW 1100RT. In a month I’ve put on over 3000 miles. The GSXR? I still have it. Someone has given me money for it, but they haven’t picked it up, yet. It needs quite a bit of love, but it will always be my first. I’ll be bummed when it’s actually gone.