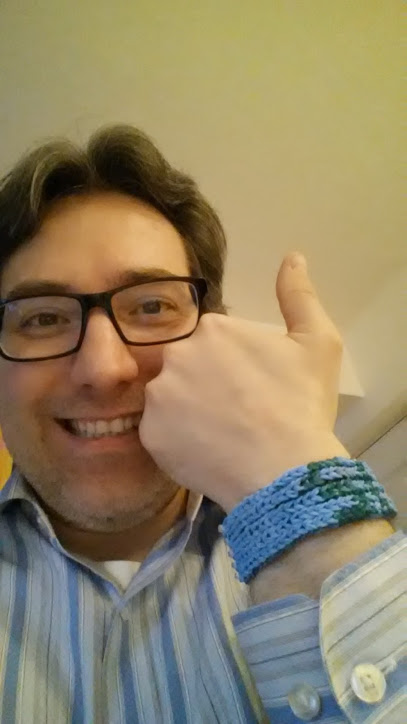 I was a recruiter, in HR. I’ve since moved to the IT department. Someone I know informed me  that a former co-worker, in Recruiting, had passed away. She worked remotely, so I did not interact with her very often, mostly on conference calls or the occasional visit to corporate HQ. She was diagnosed with pancreatic cancer just before Thanksgiving 2013. She passed away this past week, March 26 or 29th, not sure exactly. That’s fast folks. I sent a card to her widower and son. Tragic. Unfair.

Then there’s Si. He got cancer when he was 2 years old. Two! He’s now 5. I am connected to his father on Google+ and found out about Si from a post of his. Si now has his own website. You can find it here: http://supersiguy.com/

I’ve never met Si, but I consider him my little buddy. I guess he and his mom were keeping occupied one day making some crafts. His father was mentioning providing the crafts to those that may be gracious enough to donate money. I jumped on it, immediately. It wasn’t a lot of money. I got the first one of Si’s creations that went out to the public receiving it in the mail yesterday. I told his dad that Si could pick the colors. I now realize it has ‘SI’ on the wrist band, in green, and that it is just the right size for my wrist. Thanks again Si! I love it and proudly show it off to everyone.

Kids like Si should not be thinking about medicine, getting sick, feeling like crap, wondering what their T cell count is, and the dread that comes with a chronic illness/disease. They should be picking their nose, have a phobia of germs – girl or boy germs, running around like princesses or super heroes, and just being a kid. Not cooped up in a hospital room for weeks, maybe months, and having to wear a mask over their face when they go out because their immune system has been nuked by radiation.  Then there’s the toll it takes on the family. Siblings can be unintentionally alienated, which can be bad news and wreak even more havoc on the family. Juggling priorities brings about stress levels like nothing a job can induce. “Oh, your project deadline got missed? Bummer, my child has cancer!!” We lose perspective.

I look back at my sister’s situation, when she went through all the crap that is leukemia. It’s a bit of blur now that it’s been over 27 years ago. I had a cousin my age. So yeah, I moved away from friends to live with auntie, uncle and cousin, but I met new friends and didn’t become a complete basket case due to an absent parent.

We all have our personal stories of how cancer has effected us, a close loved one, or someone we know. There are of course stories of conquering and surviving cancer. I close relative had cancer and the first thing that entered my mind was that it wasn’t a death sentence. They caught it so early that it was removed with little complication and no radiation or chemo. We’re thankful. But it’s still scary, right?

Every once in a while I see a picture shared on social media. “Share this, get me 10000 likes in the name of cancer awareness” or some other message. Those bother me for some reason. I think it’s because people will reshare the image but I don’t know why. It doesn’t DO anything. It doesn’t help someone defeat cancer. It may spread awareness, but it can also be used as a scam. You see, there are butt heads out there that want to pump up the ‘likes’ on a Facebook page, they remove the content that got them the ‘likes’, and then sell the page because it has 10000+ likes/member audience. Yeah, the person with cancer may not even have cancer. Gasp! Yes, they’re preying on you being gullible; meanwhile, kids like Si are having their legitimate battles.

Do something meaningful. I work with a lot of people that make a lot of money. I know because I was a recruiter and worked in HR. Heh.  Yes, we all have to live. I get it. But throwing $10 to a charity like The Leukemia & Lymphoma Society or the American Cancer Society does more than that stupid ‘like’. It’s a spit in the bucket in the grand scheme of things, but it does make a difference to those that need it. If you’re already helping in a meaningful manner, I extend a sincere ‘thank you’ for doing that.