I’m a big audible.com fan. I find there’s plenty of dead time that could be used for something, like driving in my car, and podcasts and audio ‘books’ do the trick.

Most recently I ‘consumed’, using ‘read’ when referring to an audio book seems weird, Of Dice and Men by David M. Ewalt. 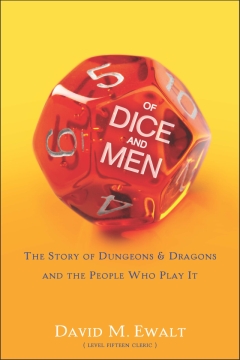 I can’t say this will be the most formal of book reviews, but a short synopsis never hurt. I’d say this is intended to cover the, “I consumed <insert title> recently.” and the standard reply to those that would ultimately ask, “what did you think?”.

It reminded me of Fantasy Freaks and Gaming Geeks: An Epic Quest for Reality Among Role Players, Online Gamers, and Other Dwellers of Imaginary Realms by Ethan Gilsdorf, where the author reminisces about his gaming past and then rediscovers it. I can relate to this. It may have happened to many of us. There is fictional pieces, done from the perspective a rpg party member, it’s actually narrated in the audio book outside the normal prose. I didn’t care much for that. It’s kind of like hearing about someone’s character. It broke up things a bit too much for me.

The history of TSR and Dungeons and Dragons was the interesting part for me. Much of it was known, but I did enjoy much of the background. I actually didn’t realize the limited contributions that Arneson played in the overall scheme of D&D. I’m sure this could be debated, but nonetheless, it’s no secret how much Gygax had to do with the game and TSR. I was also amazed at the shooting star that was TSR and how they utterly f’ed it all up. I mean, we’re talking 4000% growth at one point, $16M company gone to crap. Amazing.

Later in the book the author did a pilgrimage to Lake Geneva and Gary Con. Nice touch. Again, I can relate. And then there was a chapter on LARP. Great, but nothing that appealed to me. Seemed like it was filler since it didn’t relate to TSR, D&D, or Wizards of the Coast – current owner of the D&D properties. Hell, someone could have thrown in World Of Warcraft or something similar.

In the end it’s a decent listen, but set your expectations medium to low. If you aim them too high you will come across disappointed.